A multidisciplinary research team recognised at the Irish Laboratory Awards 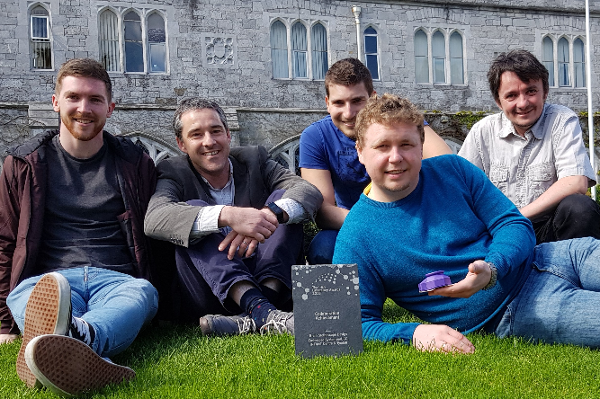 A multidisciplinary research collaboration from Cork has been recognised at the Irish Laboratory Awards for its pioneering work in creating next-generation ‘brain stethoscopes’.

Launched in 2013, The Irish Laboratory Awards has established itself as the premier event in Ireland for benchmarking those that demonstrate excellence, best practice and innovation in Ireland’s laboratories.

The team, who received recognition by The Irish Laboratory Awards, comprising researchers from Embedded.Systems@UCC research group, INFANT Centre and Tyndall National Institute, are joining forces to develop advanced EEG monitoring systems with a particular emphasis on applications in neonatal monitoring.

The low-cost brain 'stethoscope' will be routinely used to monitor cerebral function during the early neonatal period, in the same manner as a conventional stethoscope is used to monitor heart and respiration. The handheld system – currently the size of a tennis ball and expected to be significantly reduced in size as the work progresses - can be easily applied to any area of the baby's head. Using advanced algorithms developed at UCC, the acquired EEG signal is then wirelessly transmitted to a mobile device and converted to audio tones for easy and real-time analysis by clinical personnel, who hear soothing tones when brain functions are normal and a more alarming sound when irregular EEG waves, which may be indicative of seizures, are detected. The interpretation is also facilitated by a state-of-the-art automated seizure detection system which is based on a deep learning algorithm and provides objective decision support to healthcare professionals.

Dr Conor O’Mahony of the Tyndall National Institute, whose team are developing microneedle-based dry electrodes to overcome problems associated with conventional electrodes, noted that several high-impact presentations have already been made at leading conferences such as the IEEE Engineering and Biology Society and the International Conference on Microneedles, and expects further patents and publications to be announced as the collaboration strengthens.

Dr Andriy Temko, INFANT funded investigator, who has been developing the system as part of a Wellcome Trust Seed Award in Science and an SFI Technology Innovation Development Award, noted that such a low cost device for sound-based observation of brain health could be used by all healthcare professionals globally, greatly improving access to diagnosis and treatment for disadvantaged communities. In particular, he stated that the development of an easily accessible device to assess brain functioning may revolutionise neurocritical care of newborns to allow quick assessment of brain health in primary care, emergency care units and resource-limited settings.

Receiving the Collaboration Achievement Award for 2018 at a ceremony in Dublin, Dr Emanuel Popovici, of UCC’s Department of Electrical and Electronic Engineering, said that the portability and pervasive nature of the device makes it possible to acquire accurate EEG data with low-cost equipment and minimum patient preparation. This solution overcomes the many challenges that are faced in intensive care every day by neonatal healthcare professionals, particularly those without EEG acquisition and interpretation expertise.

The Sound of Newborn Seizures