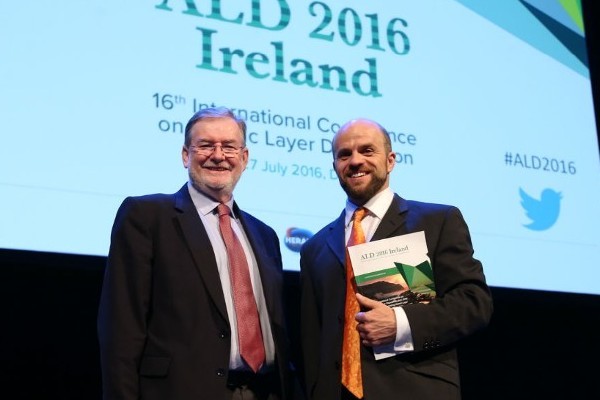 The 16th International Conference on Atomic Layer Deposition (ALD 2016) will be a three-day meeting dedicated to the science and technology of atomic layer controlled deposition of thin films.  In every year since 2001, the conference has been held alternately in United States, Europe and Asia, allowing fruitful exchange of ideas, know-how and practices between scientists. This year, the ALD conference will incorporate the Atomic Layer Etching 2016 Workshop, so that delegates at the two events can interact freely.  The conference will take place on 24-27 July 2016 at the Convention Centre Dublin, Ireland. This is the first time the conference has been held in Ireland.

Atomic Layer Deposition (ALD) is used to fabricate ultrathin and conformal thin film structures for many semiconductor and thin film device applications. A unique attribute of ALD is that it uses sequential self-limiting surface chemistry to achieve control of film growth in the monolayer or sub-monolayer thickness regime. ALD is receiving attention for its applications in leading-edge electronic technologies, advanced microsystems, displays, energy capture and storage, solid state lighting, biotechnologies and medical technologies. Indeed, ALD is particularly advantageous for any advanced technology that requires control of film structure in the nanometer or sub-nanometer scale.

As in past conferences, the meeting will be preceded by one day of tutorials. An industry trade show will be held in conjunction with the conference, to act as common ground for academia and industry to meet and discuss the future applications of ALD. Extra opportunities for collaboration will be provided through working groups of the COST (European Cooperation in Science and Technology) Action ‘Hooking together European research in atomic layer deposition (HERALD)’.

The newest developments in ALD will be announced at this year’s conference. Wayne State University (Michigan, USA) researchers have found a way to deposit tantalum metal with Ångstrom-level control for the first time at low temperature without plasma. This opens up the prospect of using tantalum in layers just a few nanometers thick as the liner for interconnect wiring in the complex geometries of next-generation electronic chips, ultimately allowing faster less power-hungry smartphones and computers.

Holst Centre and TNO (The Netherlands) are showcasing a breakthrough technique to accelerate the growth of thin films in real factory settings, which could lead the way for a new generation of smart fabrics, wearable electronics, solar cells and flat-panel displays.

This conference offers an excellent opportunity to learn about the most recent R&D activities in ALD science and technology from researchers around the world. We look forward to your participation.

"This conference showcases a field that is strategically important for Ireland," said conference Co-Chair Dr Simon Elliott, Head of Materials Modelling for Devices at Tyndall National Institute in Cork, “Atomic layer deposition is a unique technique for growing ultra-thin films that has become a critical technology for the manufacture of leading-edge semiconductor devices.  A major focus for today’s research is how to use the same technique to enable new developments in other high-tech manufacturing sectors, such as solar energy, high-capacity batteries, displays, lighting and medical devices.”

The conference has over 800 delegates, 50 exhibitors and has attracted over 430 abstracts.

Additional Information Available on the Web

About the ALD2016 Ireland conference http://ald2016.com/
The 16th International Conference on Atomic Layer Deposition (ALD 2016) will be a three-day meeting dedicated to the science and technology of controlled deposition of ultra-thin films at the nanoscale.  In every year since 2001, the conference has been held alternately in United States, Europe and Asia, allowing fruitful exchange of ideas, know-how and practices between scientists. This year, the ALD conference will incorporate a workshop on the exciting new topic of Atomic Layer Etching.  A record-breaking number of scientific presenters and industrial exhibitors are attending the 2016 event.  The conference will be hosted by Tyndall National Institute on 24-27 July 2016 at the Convention Centre Dublin, Ireland.

About Tyndall National Institute https://www.tyndall.ie
Tyndall National Institute is a European leading research centre in integrated ICT (Information and Communications Technology) hardware and systems. Specialising in both electronics and photonics – materials, devices, circuits and systems – Tyndall works with industry and academia to transform research into products in its core market areas of electronics, communications, energy, health, agri-food, and the environment. With a network of over 200 industry partners and customers worldwide, it is focused on delivering real impact from excellent research. Tyndall at University College Cork, Ireland, employs over 460 researchers, engineers and support staff, with a full-time graduate cohort of 125 students. The institute generates over 230 peer-reviewed publications each year. It has experts at designing, miniaturising and prototyping products that are driving connectivity in the application of the industrial internet. Tyndall is the lead institution for the Science Foundation Ireland funded Irish Photonics Integration Centre (IPIC).

About HERALD https://www.european-ald.net
HERALD (Hooking together European research in atomic layer deposition) is open to all ALD researchers from the member countries and aims to provide an open and neutral forum for collaboration and the exchange of latest findings. Members include universities, research institutes and companies representing the complete supply chain for materials processing- precursor suppliers, equipment manufacturers and high-tech manufacturing.

About COST http://www.cost.eu
COST (European Cooperation in Science and Technology) is a pan-European intergovernmental framework. Its mission is to enable break-through scientific and technological developments leading to new concepts and products and thereby contribute to strengthening Europe’s research and innovation capacities. It allows researchers, engineers and scholars to jointly develop their own ideas and take new initiatives across all fields of science and technology, while promoting multi- and interdisciplinary approaches. COST aims at fostering a better integration of less research intensive countries to the knowledge hubs of the European Research Area. The COST Association, an international not-for-profit association under Belgian law, integrates all management, governing and administrative functions necessary for the operation of the framework.