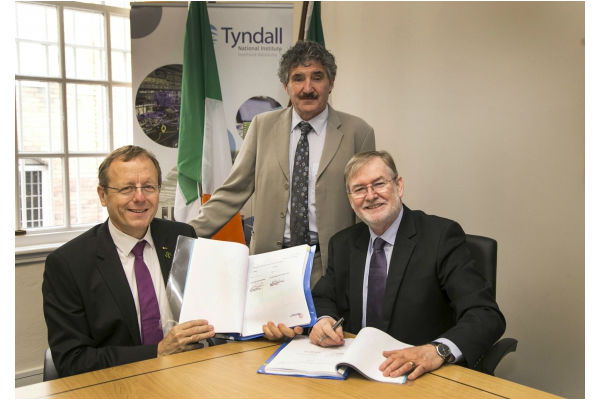 Minister for Jobs, Enterprise and Innovation Mary Mitchell O’Connor TD welcomed the recently appointed Director General of the European Space Agency Jan Woerner to Ireland. On his visit he saw for himself the rapid expansion of the Irish space sector in Ireland and he set out his plans for the European Space Sector and role which Ireland can play.

Welcoming Mr. Woerner to the Department, Minister for Jobs, Enterprise & Innovation Mary Mitchell O’Connor, TD,said “I am delighted to welcome Mr. Woerner to Ireland today. The European Space Agency plays a critical role in developing the Irish space industry particularly SME and High Potential Start-Up sectors. This is an exciting time for the Irish space industry and with the support of my Department and Enterprise Ireland the Irish space sector is set to expand at an unprecedented rate over the next few years.   ESA has had some remarkable achievements in recent years more recently the Rosetta Mission’s rendevous with Comet 67P last year”.

The Minister continued “Our investment in ESA will manifest itself through new companies entering the space sector, scaling of existing companies and the development of a strong cohort of high technology start-ups, leading to increased sales, exports and jobs. Investment in ESA space programmes, given the pace of expansion of the Global and European space economies, will put high-tech Irish companies and researchers in a position to exploit this potential to the maximum. ”

Also welcoming Mr. Woerner to the Department Minister for Training and Skills John Halligan TD said “Ireland is an active and proud member State of ESA for over 40 years. Membership of ESA provides Ireland’s businesses with access to a €5 billion per year technology development organisation that has no equal anywhere outside NASA along with greatly improved access to Global and European institutional space clients, prime contractors and technology supply chains.” I as Minister with responsibility for Innovation will continue to support Ireland’s science sector through the implementation of Innovation 2020 – Ireland’s Strategy for Research and Development, Science and Technology. Investment in the Irish Space Sector will help achieve key targets in the Plan particularly in relation to Business Expenditure on R&D and Ireland’s R&D intensity.

As part of his visit the European Space Agency and Tyndall National Institute (as Host in partnership with Maynooth University and Athlone Institute of Technology) signed an agreement establishing a Space Business Incubation Centre in Ireland which will target support for 25 Irish Start-up companies in space related technologies by 2020.

Speaking during his visit to Ireland Mr Jan Woerner said “Global space economy is undergoing rapid change as more countries enter the 21st century space race.   Given the high level of technology innovation we have seen in Ireland, Irish space companies are ideally placed to gain a significant share of the global space market and are already expanding rapidly into it.”

Ireland’s investment in ESA has contributed to the development of a highly knowledge-intensive industry sector with a demonstrated direct effect on the participating companies’ ability to generate commercial export sales in the commercial space and non-space market.” He added that “ESA provides a platform to accelerate the significant exploitation of the Global and European space markets and the level of investment represents a fraction of the total economic benefits.”

The Irish Government's annual investment in ESA is supporting strong growth in the sector in Ireland with the number of companies in the sector expected to expand to over 80 by 2020, generating annual revenues growing from €76 million in 2015 to €135 million by 2020. This investment will also double employment with the creation of over 1,000 high value technology jobs in Irish industry by 2020. Companies involved with ESA are also projected to increase combined turnover from €274 million to over half a billion by 2020.

He added that “a unique and unprecedented set of economic circumstances and commercial opportunities are available to Ireland and Irish Industry to capitalise on past and future investment in ESA which will generate significant economic impact through new company formation, scaling, new MNCs, increased high value long term employment, rapidly increasing turnover and exports and additional and increasing levels of Business Expenditure on R&D. The Director General expressed the hope that Ireland would continue to increase its level of investment in ESA at the upcoming ESA Ministerial Council in December 2016.

Julie Sinnamon, CEO, Enterprise Ireland added: “I am delighted that the Director of ESA is visiting Ireland at this point. Ireland’s investment in ESA programmes will foster increased innovation and business development opportunities within the space industry and research sectors in Ireland and Europe. It will also support Enterprise Ireland client companies who are developing new and innovative technologies for the European Space Programme and the global space market.“