Leap in development of clean, renewable fuels from sunlight and water 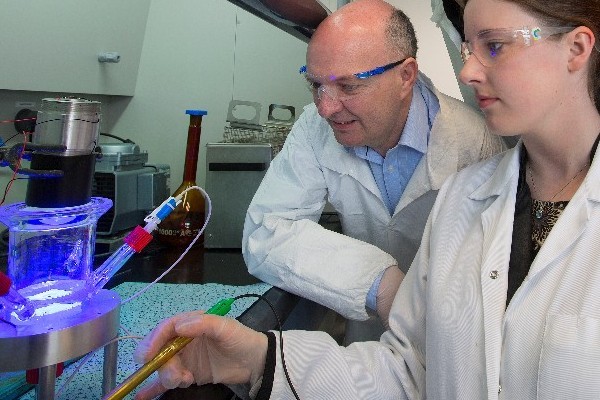 Researchers from Tyndall National Institute, Cork, and Stanford University have announced a significant development in the design of solar cells that can be submerged in water and help to produce clean, renewable fuel from 'water-splitting' chemical reactions. In a paper published in the January edition of Nature Materials, the researchers explain how their new design of submerged, water-resistant solar cell produces a record-breaking voltage, suggesting that it will be possible for the electricity needed to split water molecules into fuel components to be generated solely from sunlight.

This 'artificial photosynthesis' can be used to split water into its constituent elements of pure oxygen and hydrogen, where the hydrogen represents a clean fuel that produces only water when it is burned. It can also be used to produce methane (natural gas) and methanol from reactions involving hydrogen and carbon dioxide. With sunlight as a sole source of energy, water-splitting reactors could provide a renewable source of hydrogen, methane and methanol, and potentially funnel CO2 into reactors for transformation into fuel instead of releasing it into the atmosphere, reducing its harmful effects on the global climate.

The RENEW project (Research into Emerging Nanostructured Electrodes for the Splitting of Water) has brought scientists from Ireland, Northern Ireland and the US together to tackle the challenge of designing solar cells that do not corrode under water and produce enough voltage to split water molecules without an outside source of electricity. A breakthrough in the corrosion issue was achieved by Professor Paul McIntyre and colleagues at Stanford University in 2011, who added an extremely thin layer of titanium dioxide to the anode part of the solar cell to protect its surface from water corrosion. However, this presented a problem: the thicker the protective layer, the less voltage generated by the silicon-based cell beneath.  Dr Paul Hurley of Tyndall National Institute in Cork suggested an innovation that might boost the voltage, fabricated a prototype and sent it to Stanford for testing, where the voltage-producing capacities of the new solar anode design exceeded all expectations.

Dr Paul Hurley, one of the lead researchers at Tyndall National Institute, explains, “The holy grail of water-splitting using solar cells is that you put it into water, and just use solar energy to split the water molecules. The aim is to get hydrogen reliably without applying any voltage. However, when the protective titanium dioxide layer was added, it resulted in a reduction in the light induced voltage. At Tyndall, we suggested adding a new layer of silicon doped with an excess positive charge between the original silicon cell and the protective layer. The idea was to create just a little more photovoltage than achieved with one type of silicon, but when we sent it to Stanford for testing, they found it was much better, and in fact it broke the record for the voltage produced by this type of anode.”

“Working in collaboration with Prof Paul McIntyre and Andrew Scheuermann at Stanford, we were able to figure out why the new structure worked, and how it allowed the protective layer to be made thicker without paying the penalty of less photovoltage,” said Dr Hurley. “The anode can now be improved for long-term stability and to achieve as much photovoltage as you can get from silicon, and the concept also applies to other semiconductors. At Tyndall, we are now examining different materials that can protect silicon, conduct electricity and be transparent enough to transmit light”.

As Dr Hurley notes, an important aspect of the project was bringing together researchers from different backgrounds who had new perspectives on the physics and chemistry of the water splitting devices, and it was this mix of different research areas which was central to the progress achieved through the US-Ireland collaboration. Coming from a background of developing energy-efficient transistors, he recognised many similarities between the design of transistors in integrated circuits and the structures used in electrochemical solar devices. While he emphasises that the voltage produced from the new design (0.6V) is not yet sufficient to split water, the record-breaking voltage opens the way for cells to be tested that use the new design principles. These could combine the silicon anode with an amorphous silicon absorbing layer into what is called a tandem cell structure, with the potential to produce sufficient voltage to split water with no externally applied voltage.

The impact of this innovation has been recognised by the journal “Nature”, who published the collaborative research paper in the online edition of Nature Materials in October 2015 and print edition in January 2016. As well as Dr Hurley, the team of researchers from Tyndall National Institute includes Professor Martyn Pemble, Dr Ian Povey, Dr Karim Cherkaoui, Dr Scott Monaghan and Jan Kegel, who are working on alternative semiconductors and catalysts in the cells; Adrian Walsh, a PhD student who worked on the new silicon anode structure and is named as a co-author of the Nature paper; and Mary White and Richard Fitzgerald, who worked on the production and characterisation of the new silicon layer. The RENEW project is funded by Science Foundation Ireland, the Department for Employment and Learning for Northern Ireland and the National Science Foundation in the US, under the US-Ireland Research and Development Partnership Programme, and will run until 2017.

Tyndall National Institute is a European leading research centre in integrated ICT (Information and Communications Technology) hardware and systems. Specialising in both electronics and photonics – materials, devices, circuits and systems – Tyndall works with industry and academia to transform research into products in its core market areas of electronics, communications, energy, health, agri-food & the environment. With a network of over 200 industry partners and customers worldwide, we are focused on delivering real impact from our excellent research. Tyndall at University College Cork, Ireland, employs over 460 researchers, engineers and support staff, with a full-time graduate cohort of 125 students. The institute generates over 230 peer-reviewed publications each year. We are experts at designing, miniaturising and prototyping products that are driving connectivity in the application of the industrial internet. Tyndall is the lead institution for the Science Foundation Ireland funded Irish Photonics Integration Centre (IPIC).