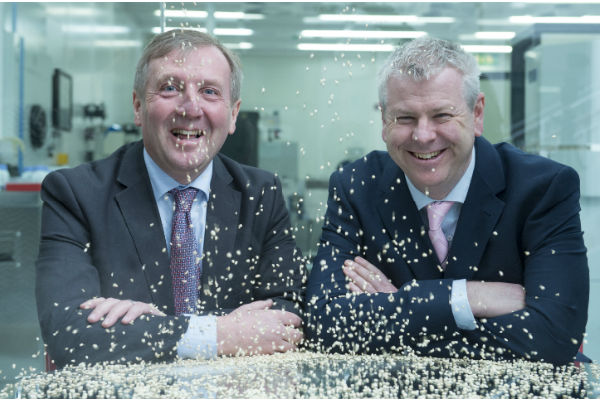 Ireland has a climate that bestows high yield potential for its tillage crops yet the maritime conditions that maintain yields also support the prevalence of crop diseases.  Tyndall National Institute, Dublin City University (DCU) and Teagasc have received an investment of over €1 million from the Department of Agriculture, Food & Marine to fund SCOPE, a new research project addressing the issue of crop disease in two of Ireland’s most important crops, barley and potato.

Crop disease is one of the biggest threats to Ireland’s tillage sector.  The SCOPE project which brings together expertise from three independent but complementary disciplines is focused on mitigating the threats posed by two of the primary crop diseases.

Teagasc and DCU will develop specific antibodies based on their previous successful research in this area. Tyndall National Institute will then use these antibodies to develop pathogen-specific nanosensors which will deliver real time, on-site detection of disease in plants.

Speaking at the announcement at Tyndall National Institute in Cork, Minister for Agriculture, Food and the Marine Michael Creed, T.D. said:

“I am delighted to announce over one million euro in funding for this important, collaborative research project, which has the potential to make a very real significant contribution to the sustainability and competitiveness of the Irish tillage sector through innovative solutions to address the major challenge of high crop disease pressures,”

Barley is the largest cereal crop in Ireland and factoring in projections for the national herd, demand for feed will increase significantly as will demand for malting barley due to planned expansion by Malsters, and although potato consumption has declined in recent years, €162 million is still spent by consumers annually on potatoes. SCOPE aims to verify the presence, or absence, of disease strains as early and as quickly as possible to protect crop yields and reduce dependency on pesticides.”

Barley crops in Ireland suffer from Rhynchosporium commune or ‘leaf scald’, and the potato sector has experienced a significant increase in virus-based diseases resulting in reduced yield. Crop disease is presently controlled using pesticides, which is unsustainable into the future due to EU legislation limiting the availability of pesticides in the medium to long term.

“A vital step in addressing barley and potato crop disease is the implementation of adequate surveillance strategies so that rapid, in-field diagnosis can be made. By inter-connecting crop pathology, immunochemistry with nanotechnology, SCOPE will generate prototype nanosensors for both leaf scald and aphid-delivered viral infections. The diagnostic system will deliver in-field results in minutes while current lab tests can take up to one week. Consequently, this will ensure that decisions to spray are made on the presence or absence of any disease, in contrast to current systems based on stages of crop development,” said Dr Alan O’Riordan, Research Fellow, Tyndall National Institute.

“SCOPE will provide us with a unique opportunity to develop integrated pest management strategies for two of Ireland’s most important crops, barley and potato. By working with our partners in Tyndall National Institute and DCU, this exciting project will generate novel, user-friendly sensors that will inform farmers and or specialists as to the level of disease in their crops. In turn this will allow users to tailor more specific chemical control strategies than is currently possible, which ultimately should lead to reductions in the chemical load placed on these crops and the environment,” said Dr Ewen Mullins, Senior Research Officer, Teagasc.

“We are delighted to be involved with this multidisciplinary project in collaboration with Teagasc and Tyndall National Institute. It will allow us to develop a highly novel antibody-based sensor that can address pathogen detection in crops of major significance to Irish agriculture and to train researchers in the latest technologies used in rapid, sensitive and specific diagnostic platforms,” Prof. Richard O'Kennedy, School of Biotechnology, Dublin City University.