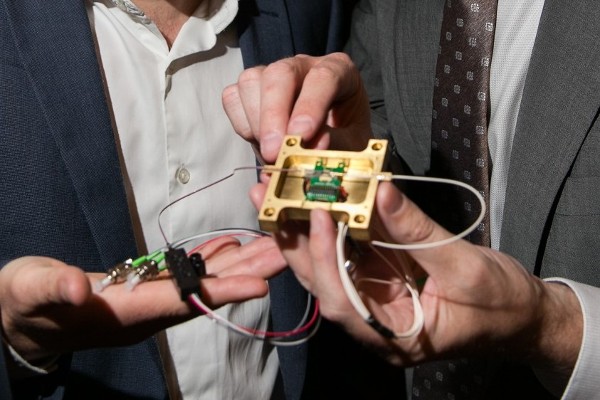 Pilot Photonics, a spin-out company built on more than a decade’s work by research teams at Dublin City University and the Tyndall National Institute in Cork, has raised almost €1 million in funding.

The company, which was established in 2012, develops and licenses comb source laser technology for the communications and internet-of-things (IoT) markets.

It was recently awarded a €335,000 contract by the European Space Agency (ESA) for the production of laser communications sub-systems for use in advanced communication satellites

Pilot Photonics secured the investment from the Bank of Ireland Kernel Capital Funds in syndication with Dublin BIC and Enterprise Ireland. It is to use the funding to expand the team as it looks to expand overseas.

The company, which is led by Frank Smyth, has developed the world’s smallest and lowest cost optical comb source (OCS). This is a type of laser that emits on multiple wavelengths, or colours of light simultaneously, based on photonic integration techniques, which combine multiple optical functions on a single photonic chip.

The technology has multiple applications across the communications, energy, and aerospace sectors globally.

“Three years ago we took a strategic decision to pursue the development of a completely new technology platform centred around photonic integration. Securing this investment from Kernel Capital and Dublin BIC is a strong validation of that strategy and the new business opportunities it has opened up. We look forward to growing the team, and winning business in both new and existing markets,” said Mr Smyth, the company’s chief executive.