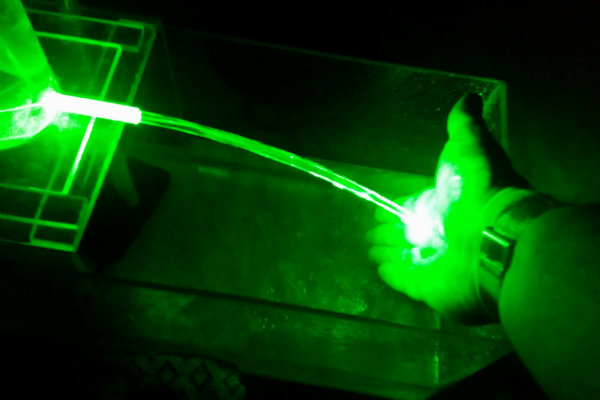 Tyndall National Institute is named after John Tyndall, one of Ireland’s most successful scientists and educators, who was born 197 years ago today.

To celebrate the anniversary of his birth, Will Knott, Maker in Chief and Teaching and Outreach Specialist, explains Tyndall’s light pipe experiment in this video which shows light travelling through a stream of water flowing from a pipe through a mechanism known as ‘total internal reflection of light’. This formed the basis of modern optical fibre technology which is widely used today in telecommunications, the internet, cable television and medtech.

Originally from Leighlinbridge, County Carlow, Tyndall became a mathematics teacher at the Queenwood School in Hampshire, England, and in 1853 became Professor of Natural Philosophy at the Royal Institution in London.

Tyndall enjoyed delivering scientific lectures to the general public and making difficult scientific topics understandable to the layman. He became extremely well known and in the 1870s toured the USA delivering public lectures to packed houses. He is best known for the explanation of why the sky is blue, and he developed the first double beam spectrophotometer (referred to as the first opto-electronic device).