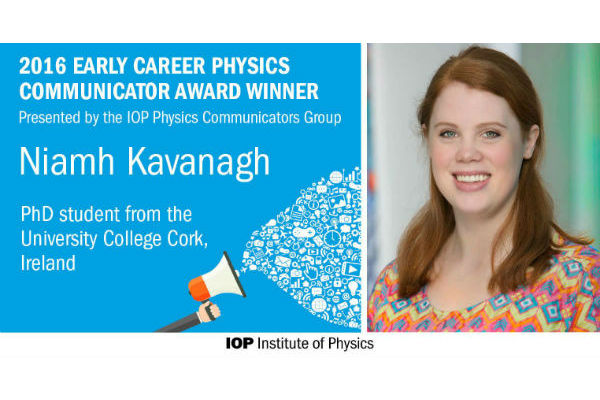 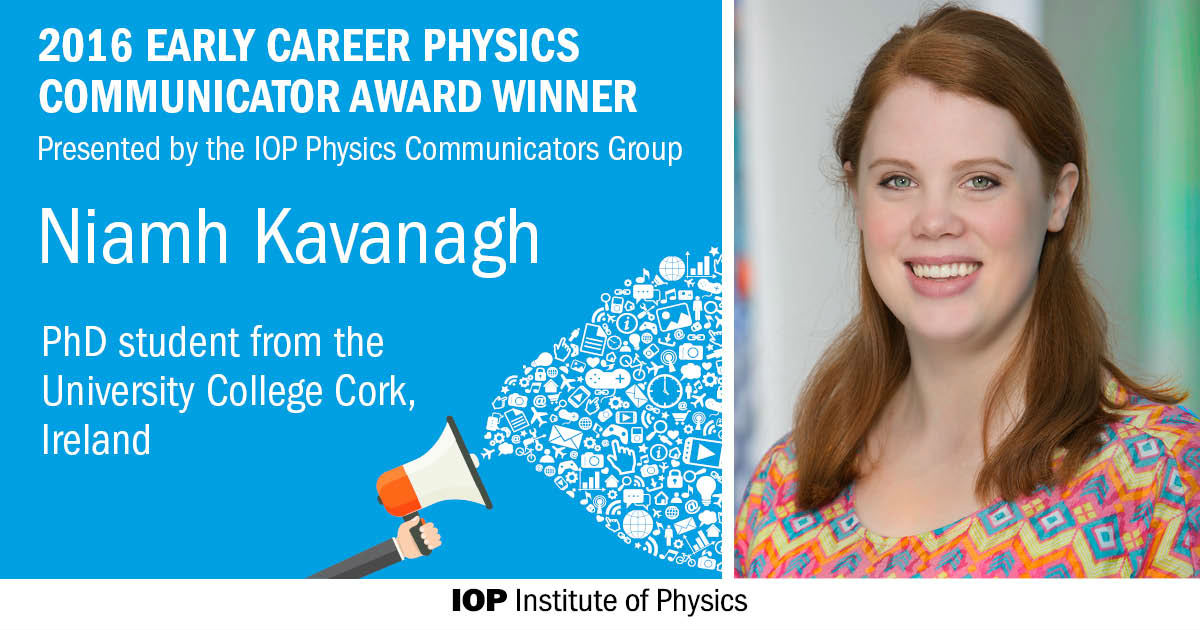 PhD student Niamh Kavanagh has won the Early Career Physics Communicator Award after competing against three other finalists at the IOP’s London centre on 21 November.

Kavanagh, a second-year PhD student at the Tyndall National Institute, University College Cork, was presented with her prize of a certificate and £500 after giving a presentation on her physics communication activities. The award is the group prize of the IOP’s Physics Communicators Group, which organised the annual event and invited science writer and consultant Dr Graham Farmelo to give a keynote talk on the art and craft of communicating physics.

In her talk, Kavanagh said that her earliest ambition was to be a primary school teacher, though this had later transformed into wanting to guide people towards physics. At university she started to teach physics to first-year science students and realised there was a need not only to inspire a love of physics among the general public but also within the wider science community itself. She began doing outreach in schools and taking part in careers events.

Entering Famelab 2015, she “completely blanked on stage”, she said, but after gaining more experience she came second in the Thesis in 3 competition then won the national finals of Famelab 2016 in Ireland. This opened up many opportunities. “I had found my true passion in life and became better at explaining my research,” she said.

She has invited secondary school students into her lab and in the summer she visited almost a quarter of Wexford’s secondary school students. She wants to bring the Women on Walls project, which aims to display pictures of inspirational women, to schools, and intends to be further involved in Science Week and to take part in I’m a Scientist: Get Me Out Of Here. She has also produced a Computers and Data book that relates to her field of fibre optics for the Science Apprentice Book Series collaboration between the Irish Independent and University College Dublin.

Speaking after the prize was announced, she said: “It’s so encouraging to see so many other people who are as passionate about science communication as I am. I can’t believe they picked me – I am so honoured, pleased and delighted.”

Her prize was presented by Farmelo, who earlier had given a talk on “Communicating physics: my 10 commandments.” Farmelo, who has written an award-winning book on Paul Dirac (The Strangest Man) and another on Winston Churchill’s role in British nuclear research (Churchill’s Bomb) as well as numerous articles, said that in communicating with non-scientists, it was important to remember that “most people find most physics boring or intimidating or both”, so it was vital to “keep it personal – imagine you’re getting feedback from someone you know in your target audience”.

In answering questions he paid tribute to excellent television presenters but said that to get more physics into television schedules “we need to convince the people who commission programmes; we have to think outside the physics lecture format”.