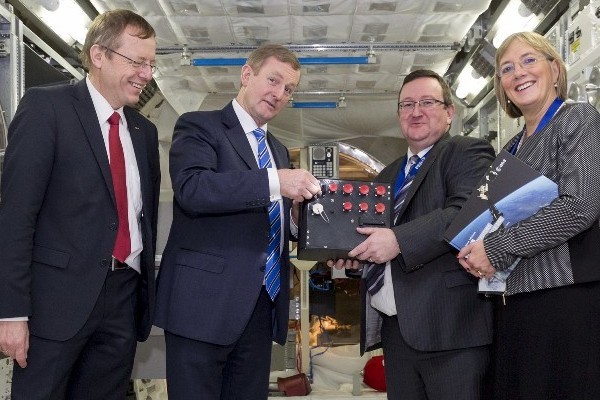 In the harsh environment of space, astronauts are exposed to many dangers - including the possibly harmful health effects of radiation exposure. Previous radiation detectors have only revealed how much exposure an astronaut has received after their return to Earth. However, a team of European researchers has developed an active and wearable radiation monitor that can measure radiation in real time and instantly warn astronauts of increased and dangerous radiation levels. It was announced that the radiation monitor will be placed permanently on the International Space Station (ISS) in June 2016 during a visit to the European Space Research and Technology Centre (ESTEC) by the Taoiseach, Enda Kenny TD, as part of the Enterprise Ireland Trade and Investment Mission to Netherlands and Germany.

The breakthrough system, which has been recently tested on the International Space Station, is the result of a European Space Agency-sponsored collaborative project with contributions from Tyndall National Institute in Cork, the German Aerospace Centre (DLR, project co-ordinator), RADOS/Mirion of Finland, Seibersdorf Laboratories of Austria, and PTB of Germany. The radiation monitor will be placed permanently on the ISS in June 2016.

Speaking from Amsterdam, the Taoiseach said: "Agencies, businesses and Governments work together across Europe to expand our reach into space. I'm delighted to see the results of this collaborative research, involving Tyndall National Institute in Cork, which has produced this new radiation monitor which will be placed on the International Space Station in summer 2016. The device will play a critical role in detecting dangerous radiation levels, immediately alerting astronauts and giving them the time to protect themselves while on critical space missions which, up to now, was not possible."

The device, a personal radiation dosimeter system, is made up of two parts: a phone-sized Mobile Unit, worn in a pouch on the astronaut's body, and a Personal Storage Device, which is a docking station to recharge the Mobile Unit, download data and transmit it back to Earth. The Mobile Unit part of the device has recently returned from testing on the ISS, and in a world-first event, it actively monitored radiation during its launch into space on board the Soyuz spacecraft. The system was developed as a result of the EuCPAD (European Crew Personal Active Dosimeters) project, and the "active" part of the name is crucial, as the innovative aspect of the device is its active, real-time monitoring of radiation levels.

Dr Aleksandar Jaksic of Tyndall's Devices and Systems for Radiation Dosimetry team said, "Currently astronauts use radiation detection devices that are passive and only get analysed on their return to tell them what radiation dose they received. If a catastrophic radiation event happens, like a solar flare, they will not know about it in time to protect themselves and hide in more shielded modules of the ISS. But this device, which can be worn in a pocket, shows the radiation levels in real time and can alarm astronauts if the dose goes above a certain threshold. In addition, it enables a time resolved personal radiation record for each astronaut."

A small team at Cork's Tyndall National Institute, led by Dr Jaksic, in close co-operation with the institute's semiconductor fabrication plant, developed, fabricatied and supplied three of the four different types of radiation sensors that make up the Mobile Unit part of the device. Each sensor covers a different type or spectrum of radiation to give a comprehensive picture of the radiation environment in space, which is more complex and harder to measure than that on Earth.

"It was a big leap for us, and a challenging project. This is the most comprehensive system ever developed for personal radiation dosimetry", said Dr Jaksic. "The project needed very specialised sensors, and we supplied three out of the four sensors that went into the finished unit. Our role has been to supply the basic detector chips, and we're very proud to have been part of it."

This project continues Tyndall National Institute's productive relationship with the European Space Agency. Since 2009, Tyndall has been contracted as a Microelectronics Technology Support Laboratory to ESTEC, ESA's research and test centre in the Netherlands.

Julie Sinnamon, CEO, Enterprise Ireland said: "Co-ordinating Ireland's industrial and research participation in European Space Agency programmes is part of Enterprise Ireland's role and I'm delighted to see how Tyndall National Institute's research has contributed to the protection of astronauts' health and the future of our space industry. We will continue to assist Irish companies in successfully bidding for ESA contracts as well as being point of reference for the international space industry interested in collaborating with Irish companies".

If the initial ten-day trial of the Mobile Unit on board the ISS proves successful, the entire unit, including its Personal Storage Device, will be placed permanently on the ISS in June 2016. Dr Jaksic anticipates that a successful deployment of the device will lead to further improvements: the devices may be made smaller, to be worn like a wristwatch, or add more sensitive detectors in the future.

"This will give astronauts a warning system to avoid excessive radiation. We are very excited to see the results of the experiment this week - flying a device into space is a crowning achievement", said Dr Jaksic. "It was an exotic project and technically challenging - it was great to be involved. We're confident that this will be a breakthrough."

"Tyndall has a long association with ESA and ESTEC. The Microelectronics Technology Support Laboratory (MTSL) to ESTEC calls on the capabilities and expertise available at Tyndall for the evaluation of new materials, assembly and packaging technologies and the quality verification of a range of spacegrade components. We are engaged in several longer-term research & development projects with ESA which generate new technologies for new applications and markets as well as advancing knowledge and expertise in space exploration technologies", said Dr Kieran Drain, CEO Tyndall.