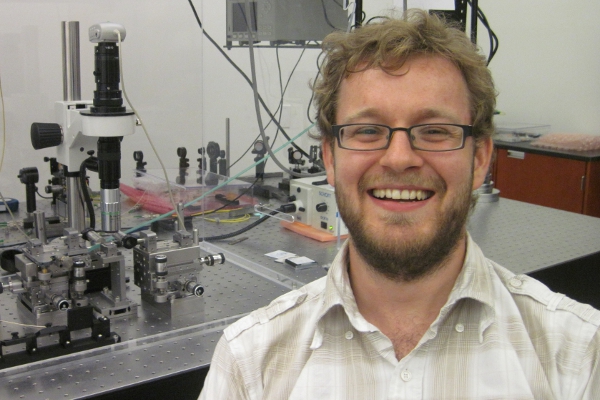 Postdoctoral Researcher, Sebastian Schulz, of Tyndall National Institute and of the Centre for Advanced Photonics and Process Analysis, CAPPA, at Cork Institute of Technology.

A breakthrough in materials for photonics applications could herald significantly higher internet speeds (by an order of magnitude), with simultaneous reductions in power consumption; this is thanks to a breakthrough by a team of scientists including Postdoctoral Researcher, Sebastian Schulz, of Tyndall National Institute and of the Centre for Advanced Photonics and Process Analysis, CAPPA, at Cork Institute of Technology. The team has developed a custom, artificial material that could improve several nonlinear optical applications, including improving internet speeds while using less power; thinner lenses for cameras and mobile phones; or new microscopy (imaging under a microscope) tools for biology and medicine.

Published in a paper in Nature Photonics, the new technology combines two known concepts, metamaterials consisting of arrays of antennas and a thin film of a nonlinear material. While in the team’s case the antenna array is made from gold and the thin film from Indium tin oxide (a transparent conductor typically used in solar cells and touchscreens), the concept can also be used with a wide range of other materials.

The new metamaterial, combining metallic antennas with a transparent conductor (Indium Tin Oxide) has a much stronger optical response than is available in natural materials. The strength of nonlinear interaction is measured by the change in the refractive index that can be achieved. Usually this ranges around 0.001, but with this new material the team measured a refractive index change of 2.5.

Sebastian Schulz explains that because the nonlinear response of most materials is typically extremely weak, nonlinear optics have rarely been used up to now: “Typical optical systems, i.e. ones using light, such as optical fibres used in the ICT industry, are linear. This means that the behaviour is independent of the amount of light in the system - if the incident light is doubled, the amount of light exciting the system is doubled. Yet, nonlinear optical systems exist, where the behaviour does depend on the amount of light entering the system. In such systems, depending on the power, light can change colour, direction or even its speed, and the team  would like to use these effects to manipulate light, for example to imprint data on light to reduce the power consumption of the internet.”