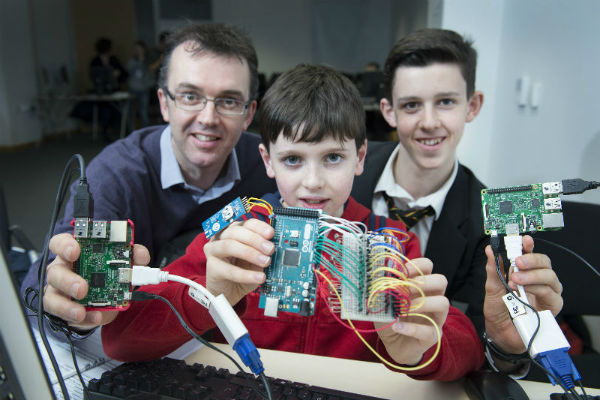 A new series of MakerDojo, the hands-on hardware club for all ages, has been launched at Tyndall National Institute. The MakerDojo workshops, which are open to the public and free of charge, take a fun and creative approach to science, technology and engineering.

Supported by Science Foundation Ireland, the Tyndall MakerDojos were the first such clubs to be created in Ireland. The hands-on workshops bring the world-leading research carried out at the institute to the public in a fun, interactive and accessible way to develop a community of intuitive developers, inventors and explorers of STEM.

“Hacking, creating and inventing things in a relaxed and fun atmosphere can really open our minds to experimentation, innovation and working together”, says William Knott, Maker in Chief and Teaching and Outreach Specialist at Tyndall.  “All ages benefit from the MakerDojo and we have people from thirteen to sixty years of age regularly attending the clubs, which vary in theme and content each time.”


The next MakerDojo workshop where you can make your own Internet of Things device which can send a tweet will be held on 30 March at 6:30pm at Tyndall National Institute. Further dates for April, May, June and September will be announced on www.makerdojo.ie.  Themes vary from month to month, with the emphasis always on inventive fun.

For more information and to sign up, visit www.makerdojo.ie