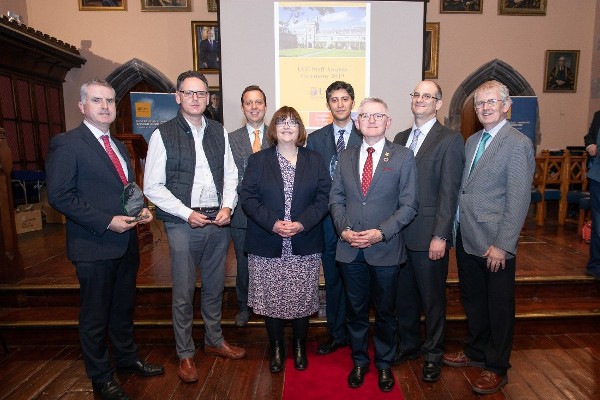 We are delighted to announce that five Tyndall staff received awards at the UCC Staff Recognition Awards. The winners were revealed at a ceremony hosted by President Pat O'Shea on Thursday, 10 October 2019.

The awards recognise a range of talents and expertise across UCC. This years' winners demonstrate the exceptionally high calibre staff within Tyndall and the high regard in which they are held by their colleagues who nominated them for an award.

The success of the ICT for Health Programme led by Paul Galvin, and supported by ICT4Health team including Carlo Webster, Eamonn Hawe, Ray Burke and Cian O’Mathuna, identified major opportunities in the medtech and pharma industries for applications of the ICT-based key enabling technologies for which Tyndall had a world-class reputation. Paul worked with internal and external stakeholders to create a truly "ABC" ecosystem, in which Tyndall and its academic collaborators would co-develop healthtech solutions with business and clinicians, nationally and internationally. This ABC ecosystem has become an exemplar of how research outputs from an academic researcher institute can ensure clinical utility and commercial opportunity.

The ICT4Health Programme and the relationships that Paul and the ICT4Health team had built with industry, was critical to a number of key successful and hugely valuable awards. In summary, the Tyndall ICT for Health Strategic Programme, which has been led by Paul Galvin has been an exemplar, not just within UCC, but at national and EU levels, for ensuring that the research excellence is efficiently translated to Impact in terms of new healthtech products and processes for industry, which will ultimately deliver new solution for healthcare.

Dr Farzan Gity joined UCC in 2009 to work towards a PhD in near infrared avalanche photodiodes in Tyndall. It was immediately evident that Farzan was an exceptionally gifted researcher and scientist, and this was recognised through the “best PhD student award” upon completion of his thesis in 2013. What is particularly striking about Farzan's ability as a scientist and researcher, is the scope of his research work. After generating a new idea, Farzan designs the mask set to realize the experimental structures, develops the process, fabricates the devices, and performs the electrical and physical analysis of the structures. In our experience, it is very rare for any researcher to have the ability to span the complete spectrum of activities from initial concept, through processing, to device analysis. In addition to working on his own projects, Farzan has always demonstrated a great enthusiasm to contribute to other projects in Tyndall and on the main campus in UCC, and takes the initiative to support other students where he is not formally a supervisor.  Dr Farzan Gity is a very rare talent and is a tremendous asset to the University, and based on the breadth of his skills, his commitment and collegial spirit, is a fully deserving candidate for a UCC Early Stage Researcher Award.

As Head of Tyndall's EU Programmes, Dr. Giorgos Fagas has developed a vision for Tyndall-UCC’s EU research activity along with a strategic implementation plan and his inspirational leadership reaches well beyond his role boundaries. His integrity, passion and dedication foster cross-institutional collaboration and motivate researchers in stepping up to challenges. As part of Tyndall's 2025 strategic plan, he has aligned a team of over 10 PI’s to develop a critical-mass programme for addressing next generation of computing technologies. Giorgos is worthy of a UCC Leadership Award because of his outstanding stewardship in driving Tyndall-UCC's successful engagement in EU Programmes and motivating internal collaboration to achieve alignment around large scale programmes.

As Head of Business Development, Hugh Smiddy consistently demonstrates commitment, imagination and innovation. His successes in winning over €10M in industry cash in 3 years and in building the global relationships which showcase UCC to the world will deliver sustained impact for years to come.

Critical to a successful commercialisation process, Hugh creates and maintains an immersive relationship with the research and TTO communities in UCC and Tyndall. Coordinating the commercialisation effort, Hugh combines strategy and execution to best effect. This is evidenced by his implementation of a strategic, value-based approach to commercialisation of Tyndall's Integrated Magnetics technology, maximising UCC/Tyndall industry income potential from this research. Consistent, energetic follow-through on the strategy with individual target clients led to Hugh closing Integrated Magnetics deals with 3 of the world's biggest technology companies, worth a combined $7. 3M in industry funding.

Managing client relationships with Tyndall's research teams, Hugh quickly gains the respect of senior management and is central to Tyndall's growing research relationships with strategic partners such as Analog Devices, X-Celeprint and Applied Materials. He has secured contracts at the highest levels with two of the top four global smartphone companies and with the 2nd largest wafer foundry manufacturer, GlobalFoundries. Don Disney, Fellow at GlobalFoundries, stated “Hugh invested 3 years in bringing GlobalFoundries to a business decision to commit to Tyndall in 2018. UCC is lucky to have such an impactful strategic thinker. He was a key differentiator in the competitive process in our decision to choose Tyndall.” The long-term strategic nature of Hugh's work will see Tyndall/UCC technology embedded in critical electronics applications world-wide thus achieving tangible economic and societal impact.

Professor Justin Holmes became the Head of the Department of Chemistry in January 2016 and successfully steered its evolution to the School of Chemistry in June 2017. This award recognises his leadership in developing and embedding a strongly collegiate and co-operative atmosphere within the School, along with a very strong collective sense of purpose and ambition. Working together with the Head of College, Prof. Holmes also successfully secured funding to replace outdated equipment in the School’s teaching laboratories and raised awareness of the condition of the Kane Building at College and University level. The result of his efforts and others’ is the ambitious Kane Regeneration Plan for which funding is actively being sought. Prof. Holmes’ Headship also saw a series of significant staff appointments, including an adjunct Professorship appointment with Tyndall, and the securing of start-up funds for these newly appointed staff, allowing them to gain a foothold in the highly competitive Irish research environment. His effective leadership has resulted in a shared vision for the School amongst the staff in Chemistry which makes him entirely deserving of this award.