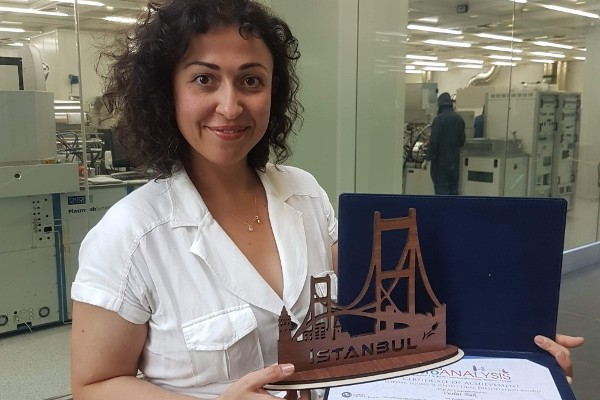 Congratulations to Vuslat B. Juska who was awarded a prize by ELSEVIER for her oral presentation in Biosensors & Biomedical Analysis Session at the 20th  Euroanalysis Conference in Istanbul, Turkey.

Vuslat received her certificate of achievement and a prize of €200 from the Elsevier Editorial Board including Prof. Anthony P.F. Turner from IFM-Linköping University, Biosensors and Bioelectronics in the Sweden, who is internationally recognised for his work in the field of biosensors and bioelectronics.

Vuslat gave a talk entitled “Microfabricated gold array electrodes modified by nanomaterials for highly sensitive electrochemical applications”. In her presentation she demonstrated the use of highly sensitive and reproducible electrochemical biosensors made using a combination of Tyndall’s microfabrication facilities and a range of nanostructured coatings that provide high surface area and analyte-specific detection. She emphasized the potential use of microfabrication technologies, nanomaterials and electrochemistry for the detection of specific analytes with high sensitivities and resistance to interference from other background species.