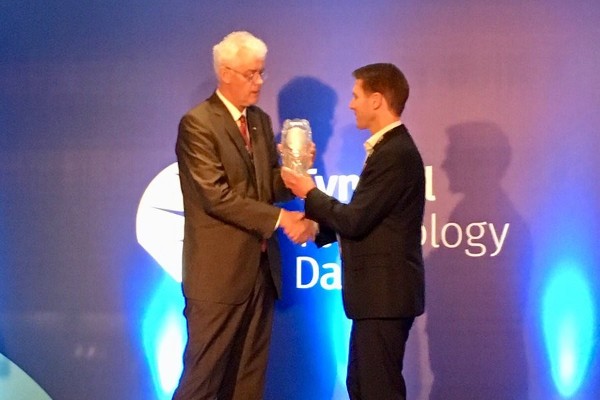 The 2018 Tyndall Alumni of the Year Award was presented to Carl Jackson, VP of Engineering, SensL Division of the Intelligent Sensing Group, ON Semiconductor at Tyndall Technology Days, on 24 October at the Aviva Stadium in Dublin.

Carl was recognised for the significant contribution he has made to the development of CMOS compatible, single photon avalanche diode (SPAD) sensors for low-light sensing applications, while completing his Ph.D at Tyndall; and for his commercial successes with the spin-out company SensL Technologies Ltd, acquired earlier this year by ON Semiconductor.

Carl’s doctoral research work was carried out at Tyndall (then the NMRC) and focused on the development of CMOS compatible, SPAD sensors for low-light sensing applications. Carl has extensive journal publications, conference publications, patents and invited talks on low-light sensors and their application in medical imaging, radiation detection and light detection and ranging (LiDAR) systems.

SensL commercialized SPAD sensor technology for use in silicon photomultiplier (SiPM) and SPAD imaging arrays. In the 14 years since being founded, SensL grew from start-up to multiple market segment leader and in May 2018, SensL was acquired by ON Semiconductor.

Tyndall Alumni of the Year Award

This award, now in its second year, recognises the substantial contributions that have been made by our alumni both while working or studying at Tyndall and also contributions made since leaving Tyndall (in areas of technology innovation, teaching/academia and/or in commercial activities). The inaugural Tyndall Alumni of the Year Award was presented to Prof. Gerry Wrixon in 2017, original founder of NMRC in 1982, which became Tyndall in 2008.