From arsenic to zinc: the chemistry of Gaelic manuscripts 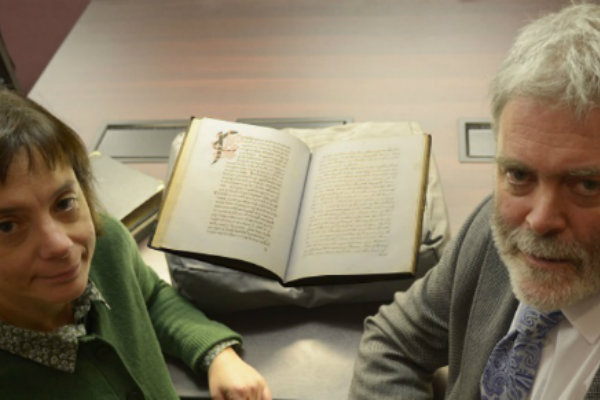 Hidden away among the letters and words that cover the Gaelic manuscripts of the late middle ages is a world of minerals and chemical compounds.

These chemicals have their own tales to tell about the craft and ingenuity of the scribes.

Pigments and inks in the glorious gospel books of the age of the Celtic Church have been subjected to analysis over the past thirty years, most notably the Book of Kells. No such analysis has taken place on the manuscripts of the vernacular vellum and paper traditions of late-medieval Ireland, however.

This is now being addressed by research conducted by Prof. Pádraig Ó Macháin of the Dept of Modern Irish, UCC, in collaboration with Dr Daniela Iacopino and Dr Daniela Saviello of Tyndall National Institute, and with the cooperation of repositories such as the National Library of Ireland and the Royal Irish Academy.

In collaboration with XGLAB of Milan, preliminary XRF (x-ray fluorescence) analysis of a selection of Irish manuscripts from the period post-1100 has shown up the presence of a range of minerals on the pages of what might in some cases appear to be plain, bland books.

Commonest of the elements recorded is iron, a token of the pervasiveness of iron-gall ink as a writing material throughout Europe over many centuries. Calcium is also high on the list, being present in a number of areas, from the egg-white that was recommended as a simple binding in some ink-recipes, to the chalk that was used to reduce the greasiness of vellum skins. Another binding agent was gum arabic, and small traces of zinc have been found in both this and in the iron compound that formed another ink-ingredient, and either may account for the readings for that mineral that the study has thrown up. This is also true of copper, which, in addition to its presence in ink, is to be found in green pigments.

Red and yellow are the pigments most frequently used in the decoration of the letters in the manuscripts. At the most basic level this involves the European-wide practice of rubrication: highlighting notable words and individual letters in red, which often derived from red lead; but red was also derived from mercury-based pigments and both lead and mercury show in the manuscripts. Lead was also often used in creating the guidelines on the ruled manuscript pages.

Yellow occurs most commonly in the decoration of large letters at the beginning of texts or sections of texts. This yellow is likely to come from orpiment, a mineral compound of sulphur and arsenic. Both arsenic and sulphur are found on the manuscript pages. Sulphur also occurs in vermilion as does mercury.

Though only in its initial stages, the research has already highlighted the exotic, and at times toxic infrastructure that lies beneath the work of the scribes of late medieval Ireland. The preliminary results of the analysis will be aired at a seminar in UCC on 30 November, entitled ‘Beyond the Text’.